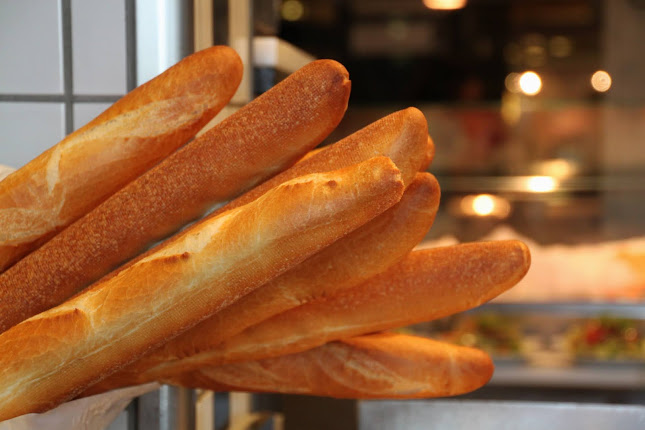 France has chosen the baguette as its candidate for UNESCO cultural status! Although strings of garlic around the neck and berets are the stereotypical image of France far removed from reality, the baguette is still very much part of everyday life in France. French people consume around 10 billion baguettes every year – that’s about 320 every second! As we were stockpiling toilet paper in the UK last March, the French were squirrelling away bread! As featured in one of my previous blogs, French people do not typically snack walking around the streets except for … “the crouton” (the crust). After work, people will typically pick up their fresh bread on their way home and more often than not, “ the crouton” will be missing by the time they get home! From the age of ten, I used to walk home every lunch from school and had the responsibility of picking up the bread on my way. Nibbling the crust was my treat unless my brother got there first! Although the baguette may seem to
Post a Comment
Read more 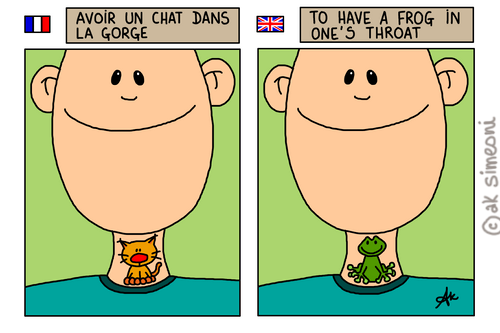 Did you know that, when talking about having a hoarse voice, we use different animals in French and English? The French expression is “ avoir un chat dans la gorge ” ( to have a cat in your throat ) whilst the English favour “to have a frog in your throat” Neither animal would be particularly welcome in reality! The origin of the French expression dates back to the XVIII century. At that time, the word “ un maton” described a clot of fur and the expression “ avoir un maton dans la gorge” referred to having an obstruction in your throat. Through time “ maton” became “matou” ( a tomcat ) and eventually “un chat” ( a cat ).
Post a Comment
Read more 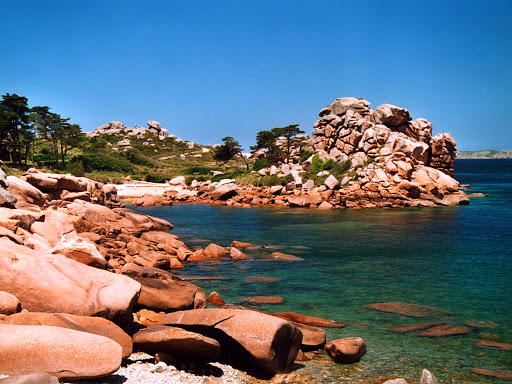 La Côte de Granit Rose  (the pink granite coast) is one of the most stunning stretches of coastline in Europe and runs from Plestin-les-Greves to Louannec in the Cotes d'Armor department of Brittany.  This particularly beautiful thirty kilometre stretch of rocky coastline is an incredible pink colour and edged with clear turquoise seas and wide sandy beaches. It makes a perfect destination for family holidays and hikers.  The pink rocks can only be found in two other places in the world: China and Corsica. The enormous pink granite boulders emerge from the sea across the entire area. One of the best places to view them is on the northern coast of  Tréguier   where wind and water erosion has shaped the boulders into unique forms. Quaint coastal cottages can be found hidden between the boulders, undeniably adding to the uniqueness of this spectacular location.  For example, as you are exploring the area, take the time to see the tiny house wedged between two boulders near  Le Gouf
Post a Comment
Read more 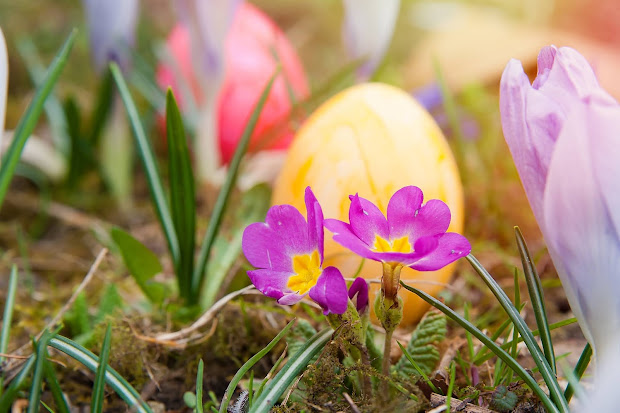 Pâques (Easter ) is one of the most important holidays in France and is celebrated with a traditional family gathering. Food is, of course, the main focus of the celebration with l’agneau pascal (roast lamb) taking centre stage. If you are walking around a French supermarket at Easter time, you might wonder why there are  les cloches de Pâques ( chocolate bells ) alongside the more familiar eggs. Traditionally, church bells ring every day of the year to invite faithful to attend the Mass. The only exception is in the run up to Easter, when they do not ring between Good Friday and Easter Sunday to commemorate the death of Christ and his resurrection. Myth has it that during this time, the bells fly to Rome to be blessed by the Pope.  The bells return the evening before Easter Sunday and randomly drop treats for children. On Sunday morning someone will shout “ les cloches sont passées ” (the bells have gone by) and the children run outside on the hunt for chocolate treats. Shops
1 comment
Read more 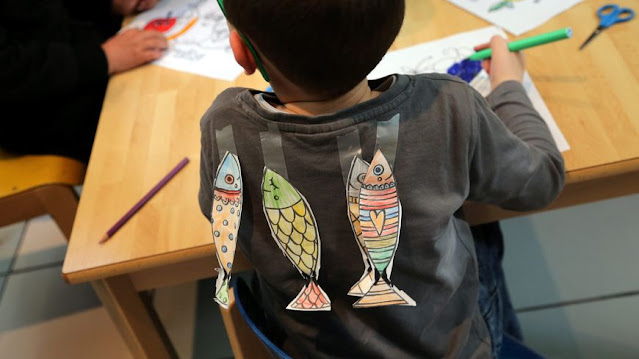 Poisson d’avril ( April’s fish ) is the French equivalent of an April Fool. It appears that the origin of the practice of calling someone a fool on the first of April can be traced back to the XVI century. During this period, King Charles IX moved the country from the Roman to the Gregorian calendar. Prior to this, New Year’s Day was celebrated at the end of March. Those who were slow to catch up, including many who ignored or protested against the change, continued to celebrate New Year around the 1 st April. These people were regarded as “the fools” and subjected to ridicule. According to the legend, the actual expression of “ poisson d’avril ” (April’s fish ) dates back to one of the first pranks played on this day. A man was sent to the market to retrieve fish on the 1 st April. Unknown to him, the fish season ended in March and as he returned tired and empty handed, he earned the title of the  poisson   d’avril ( April fish ). The tradition continues today with childre
Post a Comment
Read more

The buzzzz on Paris' rooftops. 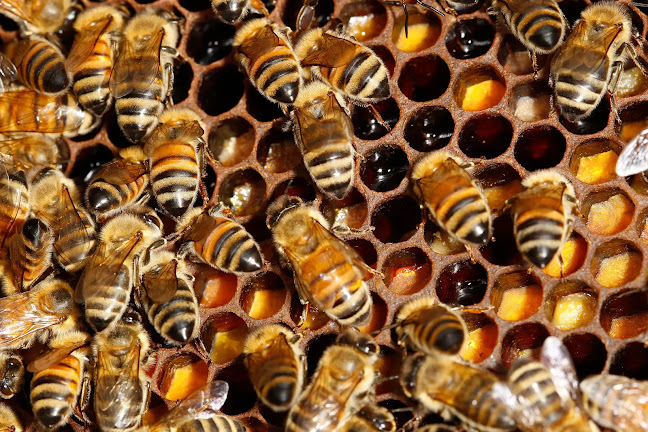 You may be surprised to discover that many of the famous buildings you visit in Paris have beehives on their rooftops. Some passionate Parisians are even installing hives on the rooftops of their offices and apartment balconies. Paris is fast becoming the centre of apiculture and this could be contributing to the salvation of bees. There is a growing public awareness of the crisis in rural bee keeping in France caused by the collapse in bee numbers. I t has been a catastrophic year for French bees. Honey harvests in some regions has been particularly hit  hard  by last year’s peculiar weather (heavy winter rainfalls and short spring followed by months of drought and northerly winds) and have fallen by up to 80%. On the other hand, it appears that city bees seem to be immune to the health problems faced by their country cousins.            Paris, with 500,000 trees and large shrubs from 150 different species, provides the perfect pollination ground for hundreds of thousand
Post a Comment
Read more 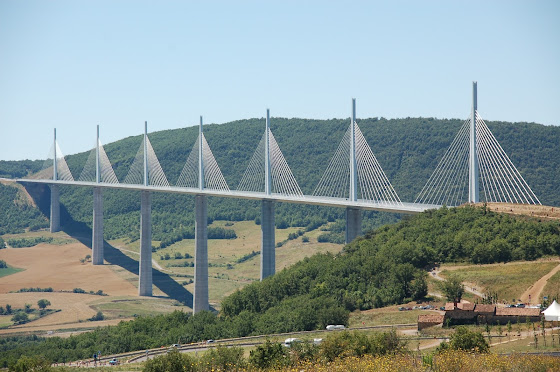 As well as being the least congested and cheapest route between Paris, Béziers and Montpellier , the A75 gives you the opportunity to drive across the most spectacular link: le Pont de Millau. Millau viaduct  holds the world record for the tallest bridge, culminating at 343 metres, 2464 metres long and touching the bottom of the  Tarn valley in only nine places. Conceived by the French engineer Michel Virlogeux and designed by the English architect Lord Norman Foster, the bridge rises majestically above the Tarn valley. S upported by stays, the very thin slightly curved steel roadway gives it the appearance of a huge yacht and rests only on seven slender pillars. Opened in December 2004, the structure receives hundreds of thousands of visitors each year: tourists, architecture enthusiasts, journalists as well as motorists. Although it took 3 years to build, planning of the gigantic project stretched to 14 years. Hailed as a major architectural work of the 21 st  century, the Millau
Post a Comment
Read more 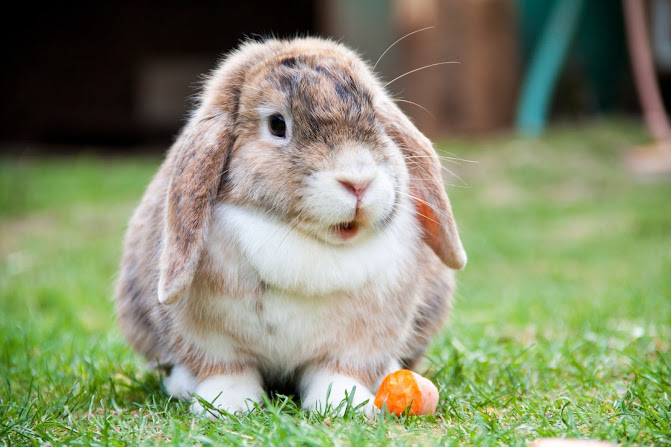 The French expression ‘ poser un lapin’ literally translate as "to place a rabbit”. Where is the link between someone looking at his or her watch and a rabbit? and what does it mean in English?  This rather random idiom finds its roots in 1880, meaning, “not rewarding the favours of a girl” or more generally to leave without paying.  The link to rabbits? It could be that among their other attributes, rabbits tend to be fairly fast creatures escaping any situation when they feel threatened?    In modern language, “ poser un lapin” means " to stand (somebody) up” as in reneging on a commitment. I need to add that the expression is more colloquial than academic!
Post a Comment
Read more 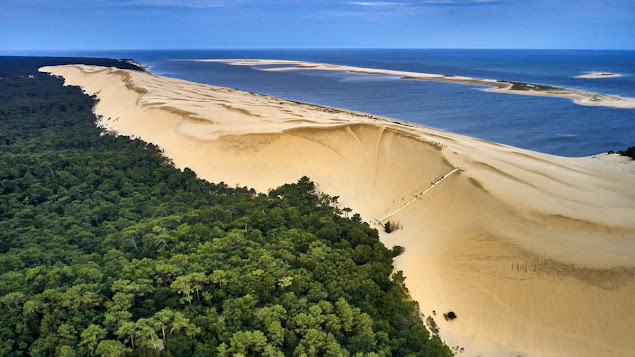 Known primarily for its remarkable size, this unique landscape i s also notable for its beauty and diverse natural environment. La Dune du Pilat i s Europe’s biggest sand dune and nestled between the Atlantic Ocean, an enormous pine forest, the Arcachon Bay and a peninsula! Just under an hour's drive from Bordeaux, the dune is located at the entrance to the Archachon Bay. Some data: made up of 60 million cubic metres of sand measures 100 to 115 metres in height depending on the year 3 km long and 500m wide Every year the dune shifts 1 to 5 metres eastward due to heavy winds and tides - slowly swallowing the pine forest at its feet. Manmade stairs protrude from the dune to make the climb a little less daunting. If you are feeling energetic, you can scramble up the dune freestyle.  The climb is worth the effort. Once at the top, you will be rewarded with sweeping views over the Cote D’Argent . The Atlantic Ocean laps the golden sand on one side of the dune and the Landes
Post a Comment
Read more 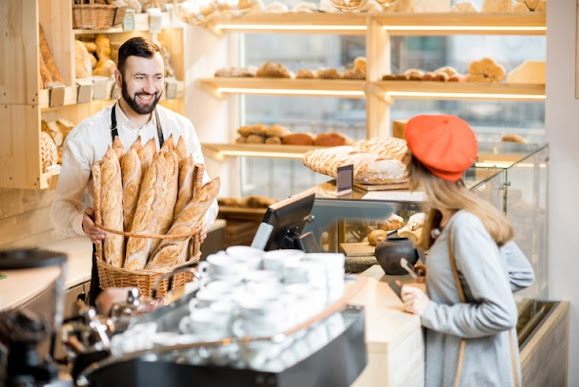 Having lived in the UK for many years, I have been able to observe so many differences in social etiquette between France and Britain.  French people always say hello when they enter a shop or a bar and goodbye when they leave. They do not just address the shopkeeper but generally anyone present by using the phrase “ bonjour/bonsoir Messieurs Dames ” or the appropriate gender if only one person is present. As a foreigner, greeting everyone as you enter the premises is the perfect icebreake r, especially if you are in a small village. You do not exchange names with people when you first meet them and do not volunteer yours . People address each other as Monsieur and Madame . For instance, a tradesman arriving at your house will just say “bonjour Madame” and “bonjour   Monsieur” will be your reply. This is how you will continue to address each other  in the   friendliest of ways of course!  In their small  village, my aunts have been going to the same bakery for years and know the own
Post a Comment
Read more 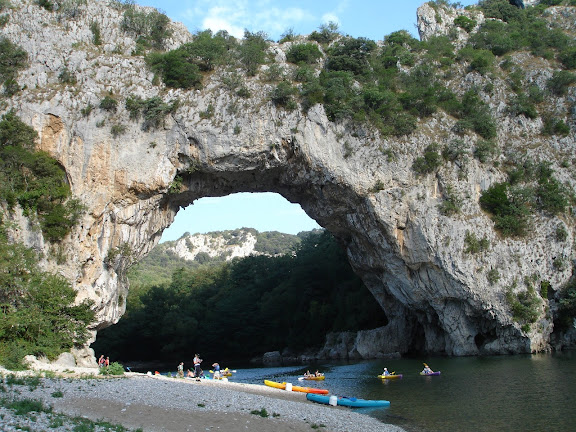 In French, the word pont  means bridge. This natural wonder is aptly named Le Pont d’Arc because it looks like a bridge. It is located in southern France, where the   Ardèche  river eroded the stone over thousands of years to create this hollow archway. Le Pont d’Arc is a French Heritage site. The arch is also the gateway to one of the most beautiful natural sites in France,  Les   Gorges de l’ Ardèche  (the Ardèche canyon)  – a very popular spot for canoeing and kayaking. My daughter Celine negotiated part of the gorge with her Dad and a group of friends some years ago. This is her account:   “It took us 6 hours. The first part was exciting with rapids and gorges soaring above us. The scenery was stunning! The river actually took us through a nudist camp and in typical French style, they were using the river to swim and the beach to sunbathe. It was quite a revelation, as I was only 12 at the time! The second part of the journey represented more of a challenge. By then we were tired,
Post a Comment
Read more
More posts

Culture by French with Nicole
With over 15 years teaching experience and expertise, French with Nicole is the perfect choice if you are looking for a language tutor. Offering tuition for all levels, from early years to exam preparation and adult conversation.